Supporting the Under Three’s

In her book, The Philosophical Baby, Alison Gopnik writes that there has been a revolution in our scientific understanding of babies in the last thirty years with a realisation that "babies not only learn more, but imagine more, care more and experience more than we would ever have thought possible. In some ways, young children are actually smarter, more imaginative, more caring and even more conscious than adults are" (2009: 5). As Montessori herself states in The Absorbent Mind (2007: 12, Kindle Edition): "The greatness of the human personality begins at the hour of birth." So how can we ensure we provide the support and help to life these younger citizens need?

In various Montessori sources, our attention is drawn to the actively learning child; the child who learns by doing. “It is through work alone that a child develops” (Montessori, M. Maria Montessori Speaks to Parents, 2017: 67, Kindle Edition). “Children develop their brains as well as their bodies through movement, and in the process of concentration, self-discipline, and perseverance with an active interest, the foundations of character are laid. To give our children a fine start in life we must see that their surroundings satisfy their need for activity and development, remembering at the same time that our own part is not that of instructor and interferer but of helper and friend” (idem, p. 75).

This recognition of the actively learning child is echoed by many in the field of child development, particularly in the constructivist and neuroconstructivist perspectives as is set out in this article in Nursery World.

The Hungarian paediatrician, Emmy Pikler’s sympathetic approach to working with the under-3’s, equally supports the idea that children need to move independently. But she also stressed the indisputable importance of nurturing and affection-based relationships which create a safe space for the child to explore and develop. Montessori herself describes love as ‘the most potent’ (Montessori, M. The Absorbent Mind, 2007: 286) and, in The 1946 London Lectures, she encourages the carer to be full of love as love is “energy in nature” (2012: 53). Gopnik adds a more scientific slant suggesting that “The craving for protection and nurturance is innate and univeral – it’s a necessary part of the evolutionary scheme of protected immaturity” (The Philosophical Baby, 2009: 180).

Finally, in a world where we are all rushed and life moves at a faster pace than ever before, the greatest gift we can give our young children is time. The time and freedom to explore, to make sense of the world. We are reminded of Montessori’s words in Maria Montessori Speaks to Parents (2017: 48, Kindle Edition): 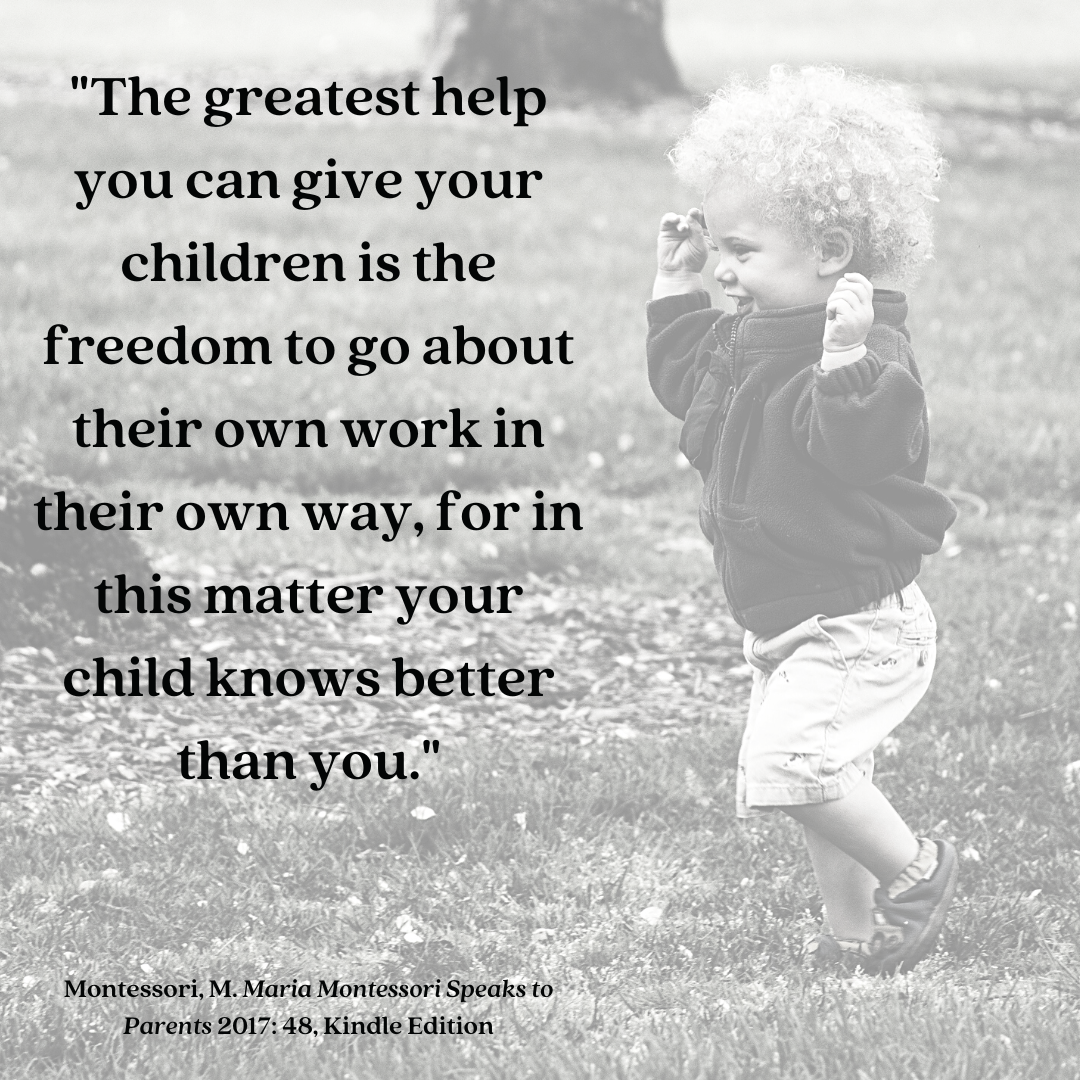 Our role could not be better summed up than in Montessori’s well-known words in The Discovery of the Child (1948: 141):

“To stimulate life, leaving it free, however, to unfold itself…”

If you would like to learn more about supporting our young citizens, do check out these further resources: